In the light of everything we don't know, this account of the utopian struggles during the civil war can bring inspiration to a 21st century world that is suffering a severe drought of hope, admiration and respect.

When we see a world run by figures that are unaccountable and failing in transparency we need to be able to ask of them - "justify your position to govern us, and if we are not satisfied by your explanation, we will change you for someone else".

Sounds fun doesn't it, and maybe a little idealistic? Well, hold on to your horses because it is not only an attractive theory, it was a working theory in Spain during the early 1930’s. This is the story of a struggle that was silenced and a genuine revolution from below.

A Revolution from Below

Yes thats right: Anarchism. But let's get one thing straight before we start - Anarchism has nothing to do with "chaos", The Sex Pistols or Internet "hackers": This is just popular Trumpesque media nonsense. So put aside all those ideas, in fact don't just put them aside, throw them in the bin for that is where they deserve to live. Anarchism is a political (and economic) theory, in the same way that that Capitalism is a political and economic theory. Anarchism is also a highly organised force (not chaotic in any sense) that is run and composed democratically. In fact, the democracy of anarchism is in many ways more transparent and accountable than the versions of democracy we live under today. Anarchism is organised from "below", as oppressed to "above". This is because when power rests "above" and with a few, then corruption inevitably occurs. Anarchists do not believe we need "rulers" in fact if we were left to ourselves, we could organise more effectively, more efficiently and more justly without overlords, royal families, CEO's; Bishops and petty tyrants.

In 1923 the CNT was outlawed by the military dictator Primo de Rivera. This was rather silly for if you remember when Frankie Goes to Hollywood was banned on Radio One back in the 1980's - the single Relax shot straight to number one and stayed there for months to the acute embarrassment of the BBC.
Well, the same thing happened here. Primo de Rivera bans the CNT only to find memberships increases and new factions get developed, such as the new Federación Anarquista Ibérica (FAI). Created on a beach in Valencia in 1927, ( one can only assume they had all just been for a swim) this radical division had its own newspaper called: Tierra y Libertad (from which Ken Loach took the name for his film - Land and Freedom) and focussed on Direct Action. ​​

The Second Republic in Spain

I don't Need no Education

Throughout Catalunya new and free schools are established on anarchist principles and for the first time, they can offer education away from the influence of the church. They are based in the cultivation of self-knowledge and the individual expression of each child. These schools are called Natura schools and no doctrine or propaganda is allowed to be taught, just the humanities, poetry and philosophy but nothing of revolutions. In fact, so much are the schools anti-ideological that they refuse subsidies from the state or town halls so that they can remain politically independent.

Such was the overwhelming popularity of the new movements that in Barcelona 1/2 of all workers are now affiliated to the CNT - whose ranks have now swollen to half a million. 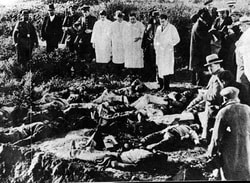 But elsewhere - further up the hierarchical power ladder in Spain - the Professional politicians declare they are not happy bunnies, and decide that the revolutionary movements have gone far enough. In Cadiz, 23 people are killed and 50 injured when the Guardia Civil are instructed to terminate a small anarchist collective at Casas Viejas. In Asturias, there is a 2 week long revolution, but it is not backed up by the rest of the county. It is brutally put down by Franco and his North African troops.

The Anarchists call on the Republic to go forward to a full social revolution. People argue. Threats are made. Names are called. Fingers are pointed. Posters appear everywhere demanding change. Some people wait for permission to change things, but who ever waits for Permission to have a Revolution? 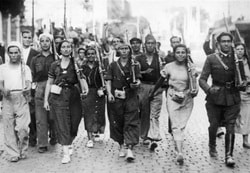 Then, before anything really gets resolved, the debate is interrupted after the 1936 election when the forces of the right stage a revolt to put down the new revolutionary movements springing up across the country that are dismantling the power of the church, the military and calling the people in power nasty names.

In Barcelona there is a fine tradition of not waiting for permission that will never come. Here, the anarchists are not simple Centralist Republicans happy to participate in the painstakingly slow process of reform. The anarchists are not interested in defending a bourgeois republic based in Madrid. This military uprising is a challenge to all they had gained as part of the social libertarian movement in Catalunya and if these gains are under threat from the army, then so be it. They must be defended by the people themselves.

The CNT demands arms for the people to defend their society, but the government refuses. So the anarchists (not waiting for permission) storm the barracks and arm themselves. They then release all political prisoners and turn Barcelona into what is effectively the vanguard of the Iberian Revolution. Change is no longer an academic subject to be debated, it is instead the consequence of Direct Action. In the city, 80% of all medium to large sized businesses are collectivized. 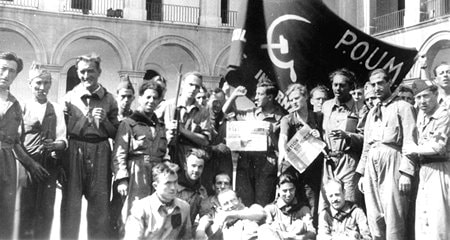 On to this scene steps George Orwell. Innocently arriving to cover the fighting as a journalist - he watches in amazement as the city is run by and for the people themselves. He joins the POUM: The Trotskyist militia, though he is later to write: "As far as my purely personal preferences went I would have liked to join the Anarchists."

Outside the city of Barcelona there is no waiting for permission either. Many small towns are run by libertarian groups, where even money is abolished, land expropriated, industry passed into the hands of the people and all work collectivized. The fruits of labour are distributed to all and there is no charge for light, water, food, cloth, education or housing.

The Anarchist revolution is underway and unlike the Russian revolution that was characterised by a vanguard political elite (Bolsheviks), in Catalunya and other places in Spain over 3 million people are working and living without a police force, ruling politicians, bosses, Cardinals, Popes nor Royal Spongers.

​"The anarchists were still in virtual control of Catalonia and the revolution was still in full swing ... It was the first time that I had ever been in a town where the working class was in the saddle ... every wall was scrawled with the hammer and sickle ... every shop and café had an inscription saying that it had been collectivized." "The Anarchists" (referring to the Spanish CNT and FAI) were "in control", tipping was prohibited by workers themselves, and servile forms of speech, such as "Señor" or "Don", were abandoned. "

The reason that the anarchist ideology spread so quickly and effectively was that it adapted to each village and each region. Every town worked according to the needs and culture of each area. There was no generalised formulae. It was a federation of independent and individual groups. And its greatest success was that it was not imposed, instead it grew organically from each place according to the needs of the people. Between the villages grew a federation where goods and services were exchanged. ​

Against this turbulent background appears a man with an unusual set of skills: He is a bank robber, an assassin, a unionist leader, a fine horse rider and a man who can peel a potato like no other.
He is a man who is not afraid when the violence of the state is directed at him, for he believes that:
Durruti's appearance on the scene will change the nature of the war. He brings to the struggle not arms, not firepower nor international volunteers nor disciplined troops - he will bring hope, enthusiasm, energy and motivation to millions. He will bring a plan to forge a new and better world.
But his is just the beginning of that story, for the hope Durruti brings is not new. Ideals of a better society go back to struggles in the 1800's in Spain and culminate in the radial times of the 1920's and 30's. The story will involve gun fights at dawn, a plot to steal the gold reserves in Madrid (Money Heist Part 1) plots to kill kings and dictators, the wearing of leather hats and the frequent cries of "Libertad"on the street and in the kitchen. It is a story of a revolution that couldn't wait any longer. And it took place in Spain.

Pre-Order the Full Story Here Before Anyone else